There is a Shinto shrine called Rikyu Hachimangu located in a town called Oyamazaki, in the south of Kyoto, where a stone monument bears an inscription. It reads: “This is the origin of oil production in Japan.”
Our owner pays a visit to this oil-revering shrine on the morning of every New Year’s Day.
According to the chief priest, in the early 9th century, the then chief priest invented a tool called chogi with which to press oil and the oil was used in their votive lighting. That is how oil production began in our country.” At that time, oil was very precious and was to be used solely in votive lighting for the purpose of worshiping deities, or as a gift to the Imperial Palace. 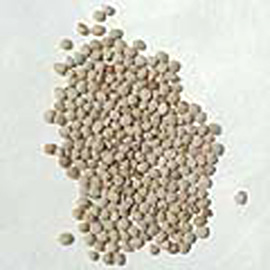 They also produced perilla oil back then. Perilla, or “white Japanese basil”, belongs to the mint family and is native to South East Asia. Its oil is extracted from its seeds, also referred to as “perilla sesame”. It is not widely known, but perilla oil is used for polishing or coating wood. Recently we receive many inquiries relating to perilla oil from the refurbishing operation sites of Kyoto’s traditional townhouses.

Perilla seeds with a diameter of 1 to 2 millimeters 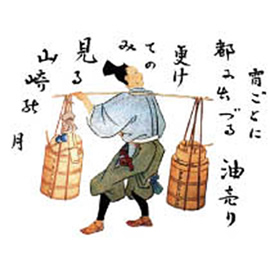 In the 19th century, when our business was founded, we mainly dealt with rapeseed oil for votive lighting. The source of oil had gone from perilla to rapeseed over time. The reason for this change cannot be explained without providing a historical backdrop, but let us save such details for a later time. With regards to its function, rapeseed possesses more merits than perilla. A rapeseed plant grows more readily, the seeds are easier to press, and can be grown as an after-crop of rice. In addition, the light produced by burning rapeseed oil is brighter than that of perilla oil.

When you hear vegetable oil, you probably think of cooking as its primary use.
At the dawn of the Meiji Period, about 150 years ago, Japan started to import petroleum, which was put to heavy use until it was followed by the spread of electricity and gas. Until that point, vegetable oil and candles were the main sources of light. There are records of oil being used for cooking before the Meiji Era, however, the use of oil in cooking is said to have spread to the average person about 150 years ago, on the brink of the Edo period. It was a time in Japanese history durinch which western culture was actively adopted. 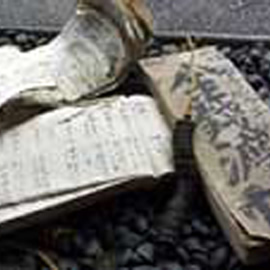 We have kept old records that outline the types of oil sold, the clients’ names, sales volumes and prices – all written in traditional Indian ink with a brush. When we looked through the records from 90 to 100 years ago, the number of products on offer was not as high as it is today, and the bestseller was rapeseed oil. A little later, sesame oil, which had been used by a limited clientele until that point, started to grow in popularity among the general public, and the rapeseed oil known as “pure rapeseed oil”, which is refined to be made suitable for cooking, rose in popularity too. The demand for cooking oil was increasing as a whole around that time.
With regards to exactly when it was that the people of Kyoto started using oil in cooking, it is said to be a little later than what is outlined by popular theory. Could this be because Kyoto residents possess unique dietary habits that differ from those who lived in huge consumptive areas, such as Tokyo or Osaka?
Glancing up from our old ledgers, we can picture quite vividly in our mind’s eye a customer from back then standing outside our 200 year-old shop, clutching their oil bottle, uttering the words “I’d like 1.8 liters of rapeseed oil, please.” It’s this rich sense of history that we try to maintain the spirit of here at the Yamanaka Oil Shop.
We hope that when you next find yourself strolling through Kyoto you will pay us a visit to experience firsthand this unique atmosphere.

The use of oil has evolved throughout history – it has gone from being extremely precious to an everyday commodity. We often tend to take it for granted and fail to realize what oil is really all about.
As oil specialists, it’s our mission to help you develop a deeper appreciation of the wonder, fun and delicacy that oil embodies.